According to the latest data from the U.S. Census Bureau, the percentage of Americans moving over a one-year period fell to an all-time low of 11.2 percent last year. The drop is particularly prevalent among millennials. New survey data from the Pew Research Center found that 25- to 35-year-olds are relocating at much lower rates than the previous generation. Last year, 20 percent of millennials moved sometime in the last year. When older generations were the same age as millennials now, they moved at higher rates: Gen X was at 26 percent, as was the generation between 1925 and 1942. 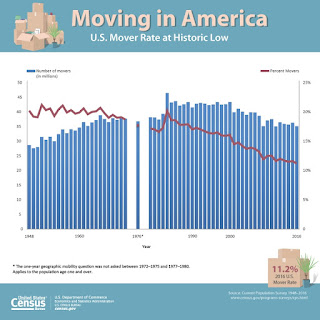 This drop has many worried about the housing market and economic vitality as this change has been tough on young adults. The job market has improved since the recession and unemployment is down yet we aren’t seeing more Americans, especially Milennials, take the next step and purchase property.

Instead, they are stuck renting with upwards to 45% a renters income in Los Angeles going to rent for people between the ages of 22-34. They are unlikely to be able to save up enough to purchase a home and with more people renting, and more rental demand, property values rise. There is more incentive for property owners to be landlords with rental payments as percentage of U.S. GDP growth hitting an all-time high last month.

According to data from Moody’s Analytics, the average time someone stays in their home is up over 8.5 years, the longest amount of time since they began collecting this data. As little as 15 years ago, the median homeownership tenure was between 5-6.5 years. In another ten years, we could easily see homeownership average up over 11 years, especially with the “lock-in” effect with current homeowners being addicted to low monthly payments thanks to the record low interest rates we have enjoyed over the past five years. If rates rise a few percentage points, current owners have even less of an incentive to move when you figure in higher monthly payments and taxes. This “lock-in”, especially in areas like Los Angeles, is creating a vicious cycle of stagnation, less inventory, and higher prices.

The other issue that negatively impacts millennials ability to buy where the best jobs are is in the major cities and they are already dealing with population overflow, and the current residents don’t want new development and support laws that can’t accommodate new demand. Without new development, the supply is artificially constrained in hot housing markets, prices are bid up and only the rich elite can own property (see recent notes on a realtors scorecard blurb about the Westside rich playing a real monopoly game with homes). It is an increasingly winner-take all economy and the land-use restrictions help lock people out of opportunity. Between 2010 and 2014, 5% of metro areas accounted for half of the U.S. job growth.

These market realities make it extremely difficult for millennials, especially those without help from parents, to purchase a home. A homeowner’s net worth is approximately 45 times greater than that of renters and we need more people sharing in that expansion of wealth
Sources- LA Curbed, Census Bureau, Zillow, Housing Wire