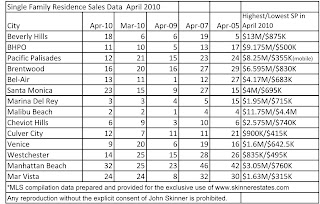 April continued the show signs of a strengthening market in the Single Family Home market but we are still pretty far off the numbers in 2007 and 2005. Total April sales for the cities included in this graph was 195 compared to last year’s dreadful 123.

However, it still lags well behind the sales activity of 276 in April 07 and 277 in April 05 even though realtors feel even busier than they were during those times.

Part of the reason we are so busy is deals are typically more complex and good/ethical agents are getting more business since the trust factor is extremely important in this type of market.

With increased inventory and an improving economy these numbers should continue to improve despite federal tax credits expiring. The Westside/Manhattan Beach price point is high enough that the credit should not have much of an impact on the numbers.

The gap between list price and sales price is beginning to shrink quite a bit compared to last year. Sales in April averaged about 97% of the list price on the Westside for homes under 2.5 million. The gap was around 93% last year at this time. The luxury home market above 5 million is still struggling with realistic listing prices and the gap between list and sales price is under 90%.

Highlights regarding the sales:

*Brentwood was close to asking or over asking on most single family sales.

*Two properties in Bel-Air went for over asking and were listed for less than a month.

If you would like information about a specific property, please send our office an e-mail.