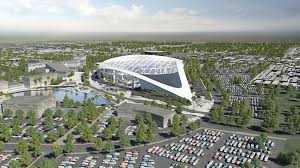 A surge in in commercial development, the Westside’s tech industry growth, major international investment and a seven-year run of very low interest rates have led to a significant rise in median sale prices over the past five years.

The median sale price in Inglewood climbed 63% from the high $200K range in 2014 to $485K last year, according to PropertyShark. Inglewood is seeing a massive surge in investment thanks to the 300-acre L.A. stadium and Entertainment district that will house the Rams and Chargers beginning next year and the Clippers franchise proposing a new stadium.

Culver City saw the second biggest increase in median prices at 60% from $800K to $1.2M. All but three of the 67 markets PropertyShark analyzed in Southern California saw the price of homes grow and half of those appreciated more than 20%.