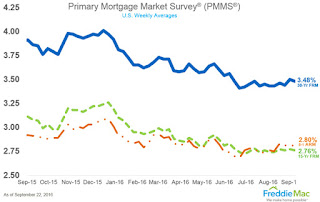 The Federal Open Market Committee (FOMC) announced they decided against raising interest rates this month. The FOMC stated that although the case for a rate increase has strengthened they have decided to wait for further evidence on continued progress towards their objectives, and allow the markets to recover from the initial impact of the U.K. choosing to leave the European Union. Minutes from the FOMC meeting also suggest that they may not even raise rates until December or later. Chief Economist Curt Long, from the National Association of Federal Credit Unions stated that despite the temporary hold, the committee also sent a strong signal that a rate hike is imminent. While Capitol Economics Chief Economist, Paul Ashworth said that this seems to have been one of the most diverse FOMC meetings in recent memory, as 3 of the 10 board members dissented and proffered an immediate rate hike. On the Lender Side, Freddie Mac stated Thursday that the average 30-year fixed rate mortgage has declined to 3.48% from 3.50% last week, and 3.86% only a year ago. Only .17% away from it’s all time low of 3.31% from November 2012! The 15-year fixed mortgage rate eased to 2.76% from 2.77%, and the yield on the 10-year notes declined to 1.63% from 1.70%