Westside Market Slowing Again?: In a complete contrast to 2009, the market has been very busy for most successful realtors this year. As expected with the expiration of the tax credits, the market under $1,000,000 has begun to slow down. However, what has been unexpected was the recent slow-down in the mid high-end (1.5M-3.5M) which was picking up pace throughout the spring. Most conversations I have had this week with other top realtors have revolved around this recent slowdown.

Inventory has been creeping up (still low compared to historical norms) and with interest rates at all-time lows we are a little concerned. It could be a brief summer time lull but the lowest interest rates on record could spur buyer interest once again. It will be very interesting to monitor the next two months in all price ranges to see where the market is headed.

It’s about time: Fannie Mae is threatening deficiency judgments and will not allow those who walk away from homes to secure a mortgage through them for seven years…they currently back 95% of the mortgages in the U.S. Article: Fannie Mae Gets Tough on Homeowners Who Walk Away.

I have no pity for people who walk away from a financial commitment they made and think it is okay. I wish I wouldn’t have to be liable for some of the stocks I invested in at the top of tech boom. Unfortunately, it doesn’t work that way and nor should it. You have risk and reward in every investment. You should never buy something you truly can’t afford and if it sounds too good to be true it usually is. You buy a home to live in and enjoy and usually in the long run it turns out to be a solid investment…as long as you buy with the proper fundamentals in mind.

$68.5 Million Listing in Beverly Hills: After spending four years and supposedly $65 million building a mega mansion on Sunset in Beverly Hills, Businessman C. Frederick Wehba Sr. has put his house on the market for $68.5 million without living in the home for one day. The businessman said he and his wife, Suzi, have decided to sell the 36,000-square-foot home because such a prominent display of wealth no longer made sense during the protracted economic slump. Check out a great article about it by Daniel Miller in the Los Angeles Business Journal: One Palace, Never Used

Thoughts On The Macro Market: Nationally, the 8.3 month inventory level is significantly above normal and with tax credit expiring and banks beginning to start unloading REO’s at a little quicker pace (just quicker than a snail’s pace), rationally speaking you would have to think prices will be on a downtrend toward the end of the year despite the record low interest rates. This past week it was announced that sales of newly built homes in the U.S. plunged 32.7% in May.

Celebrating America in Santa Monica Saturday: Santa Monica College’s annual fireworks show is Saturday June 26th at Corsair Field. It is a very good 20 minute show that begins around 9:00 pm. Gates open around 5:00 pm but now that they have a synthetic field turf drinks and food will not be allowed on the field area where many people used to picnic.

I will be back after the 4th of July holiday weekend with more key insights and a close look at Mar Vista and Venice. Have an awesome 4th of July!

On Thursday, Freddie Mac reported that it had never seen 30-year fixed mortgages at lower levels in the 39 years it has tracked them.

The Kathryn Grayson Estate on La Mesa finally hits the market for $8.995M 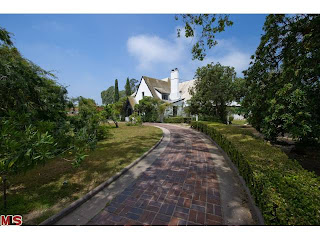 2009 La Mesa Drive, widely known as The Kathryn Grayson Estate finally hit the market this week for $8.995M. The 52,170 square foot lot (two lots combined into one), is one of the largest on one of LA’s most desirable streets overlooking Riviera Country Club.

The English Tudor home built in 1926 is most likely protected by the Santa Monica Historical Conservancy which means whoever buys the home will have to keep the original theme of the home in terms of curb appeal.

Old world craftsmanship inhabits every inch of the home that was famous for housing many Hollywood A-list parties, but it is now extremely outdated and with all due respect to Kathryn Grayson, the age and style would make for an unbelievable haunted house. Add to that, menacing guard dogs that used to patrol the grounds and frighten us as kids when walking down La Mesa at night and you really would have the best haunted house ever…sorry to digress…

The lot size and location will be a draw to the extremely wealthy. The question will be whether you can add significant square footage to the 5,381 sq. ft. home and improve the lay-out of the lot for better land use. 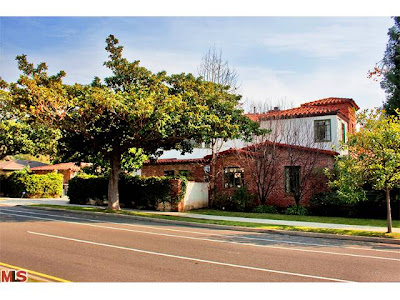 The two story Spanish brick home in need of major remodeling that sits on the corner of 19th and San Vicente, finally sold for $2.282M, about half of the original asking price of $4.495M in April of 2008.

Many real estate experts thought it would sell for about 2.40M due to the lot size of 12,516 sq. ft. and home sq. ft. of 4,148 despite being located on traffic heavy San Vicente.

The combination of the seller’s finally giving into the reality of the market (should have never been priced in the 4’s or high 3’s for that matter) and the neighborhood finding out that “Bridges To Recovery”, a mental rehabilitation center is now located across the street, ended up further depressing the value of the home. 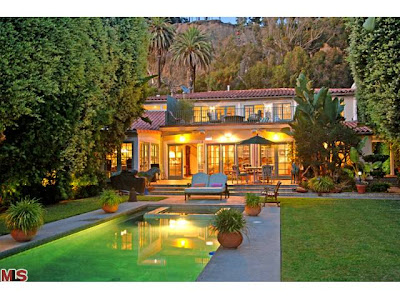 The former Douglas Fairbanks Santa Monica estate featuring phenomenal Pacific Ocean views from the second story and a park-like back-yard with a pool and spa sold for $6.862M after being listed for $7.90M for 293 days. The house is only 3,817 sq. ft. and sits on a 11,399 sq. ft. lot. The house also features a paddle tennis court and a huge deck with a fire pit. 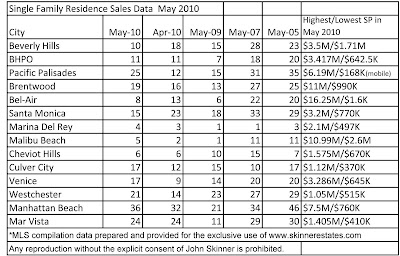 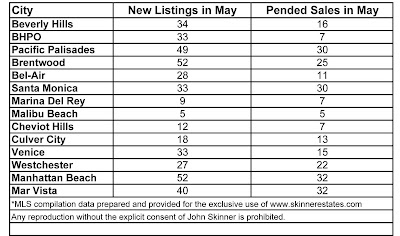 May Single Family Home Sales (“SFR”) were strong on the Westside/South Bay with most of the sales going into escrow in April right before the expiration of the homebuyer tax credit. Sales volume is significantly stronger than last year but still off 2007 and 2005 volume with the exception of Marina Del Rey which is a bit of an anomaly since it is dominated by condo sales.

The general trend for most areas was the sales price was at or just under the list price with not as many fluctuations as the past few months.

It will be interesting to see if these numbers continue to trend upward with the expiration of the tax credit. Record low interest rates and a look at pended sales in May shows this strong upward trend in sales will continue through June.

Some quick highlights:
*The Pacific Palisades doubled sales volume from April and most sales were around or over asking. 910 Chautauqua was listed for $3.79M and sold for $6.19M.
*Most sales in Beverly Hills and Beverly Hills Post Office went at least $100K under asking. 910 Beverly Drive originally listed for $4.5M sold for $3.5M. . .
*Brentwood had another strong month of sales. 5 of the 19 properties sold went for over asking with most of the others selling at or just under the list price. 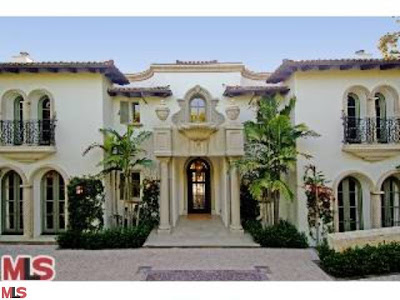 Please click on the link below to check out the Academic Performance Index (API) for any public school in the state of California. The report was released in mid May. This index is used as the cornerstone of the state’s Public School Accountability Act of 1999. It is a gauge for public schools based on standardized test results. The index assigns a score for each campus, ranging from a low 200 to a high of 1,000, with 800 as the long-term performance target. This is a good tool for perspective buyers with school age children to use when searching for a home. Areas such as Manhattan Beach and Santa Monica tend to have schools that are coveted by parents which helps keep property values higher. The gap in sales price can easily be seen in areas of the Los Angeles Unified School District that provide top performing elementary schools compared to neighboring cities that do not have high performing elementary schools.

Manhattan Beach checks in with the best performance from top to bottom (elementary through high school) in comparison to other Westside/South Bay cities.
Please click here for access to the API index.

A great site that provides more in-depth analysis is www.greatschools.net.

That was the message Wednesday from the Mortgage Bankers Assn., which released its survey of last week’s applications for home loans.

An index of refinance activity fell 14.3% and purchase applications were off 5.7% on an adjusted basis.

The lender trade group said purchase applications were still depressed because of the expiration of federal home-buying tax credits at the end of April.
By contrast, refinance applications dropped for the first time in a month despite 30-year mortgage rates averaging 4.8%. (Refis still made up 72% of all mortgage applications.)

“Despite the historically low rates, many homeowners have already refinanced recently, remain underwater on their mortgages, have uncertain job situations, or have damaged credit following this downturn, and therefore may not qualify to refinance,” said Michael Fratantoni, the mortgage group’s vice president of research and economics.

Mortgage rates are being kept low because they tend to track the yield on the 10-year U.S. Treasury bond, which has fallen again because of surging demand for Treasuries, as my colleague Tom Petruno discussed here Wednesday.
The weekly Freddie Mac survey calculates what lenders are offering to people with solid credit and 20% down payments or home equity, and can run slightly higher than what savvy borrowers are able to negotiate. It tracks smaller conforming mortgages, not a jumbo loan such as Thornberg’s.

Freddie said the average 30-year fixed rate was at 4.72% early this week, the lowest level this year and nearly as low as the record for the survey, 4.71%, which was set last December.

The 15-year fixed loan was at 4.17%, the lowest since Freddie Mac began reporting on such loans in 1991. The borrowers would be paying the lender 0.7% of the loan balance in upfront fees and discount points to get the 15- and 30-year fixed rates.

Bel-Air Mansion Goes For Between $50-70 Million… 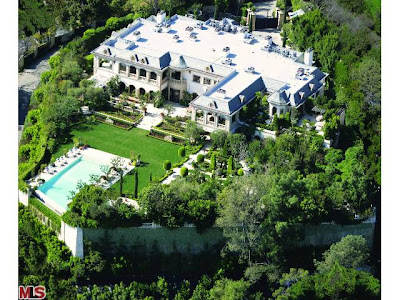 LA Times Article on mansion that will reportedly sell between $50M and $70M: