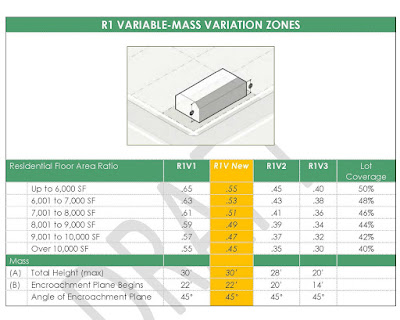 After hearing public comments Wednesday night where the majority of the public speakers were against the City Planning Commission’s proposal for a R1V2 zone change on single-family homes in Mar Vista neighborhoods, the MVCC voted 6 to 2 in favor of recommending R1V New to the City Planning Commission. The new zoning recommendations will replace the existing Interim Control Ordinance “ICO” regarding the Baseline Mansionization Ordinance “BMO” that are set to expire next year. This does not mean the City Council will elect to implement the R1V New zone for Mar Vista but it would be very surprising if they went against the wishes of the Community Council. The R1V2 proposal limits building height and floor area ratio “FAR” significantly compared to the current BMO and would hurt property values.  It is an over-reaction to the developers who took advantage of the 20% green building bonus the past seven years and in many cases over-built homes to make more of a profit.  The R1V New proposal seems to be a fair compromise which still allows people to remodel and build larger scale homes while curtailing some of the “over-building” by developers. The above chart outlines the options that communities in Los Angeles can choose from.  The Department of City Planning will be providing its recommendations to the City Council and people are encouraged to voice their opinions via e-mail to neighborhoodconservation@lacity.org. Here is the link to the full R1 Variation Zone Code Amendment Update as of August 25, 2016