After weeks of climbing, mortgage rates have now risen to their highest level in seven years According to the Primary Mortgage Market survey, the 30-year fixed-rate mortgage averaged 4.9% for the week ending Oct. 11, 2018, increasing from 4.71% last week, and significantly higher than last year’s rate of 3.91%. 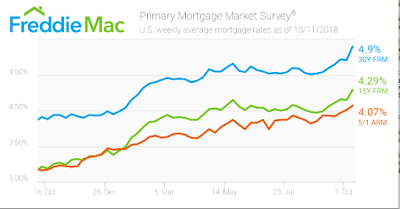 Freddie Mac said in its latest survey that fixed rates on home loans increased this week after declining for the past 3 consecutive weeks. For well-qualified borrowers who paid 0.8% of the loan amount in upfront lender fees and discount points, 30-year fixed rate mortgages were offered at an average of 4.21%, up from 4.19% the previous week.

After 11 consecutive weeks of record lows, the 30-year fixed-rate mortgage increased 3 basis points for the week ending Sept. 9 to 4.35% with an average 0.7 point, according to the Freddie Mac Market survey.

Last week’s 4.32% was the lowest rate the survey recorded since its inception in 1971. While the rate this week did increase for the first time in nearly three months, it remains below the 5.07% level seen last year.

The survey of large banks and thrifts reported the average rate for a 30-year FRM at 4.58%, a 5 bps increase from last year.

Have We Seen The Last Of Sub 5% Mortgages?

As the government continues to print money inflation fears are flaring up and we have seen interest rates climb over 75 basis point in the past two weeks.

Rates for conforming 30-year fixed loans — the plain vanilla mortgages that make up most of the market — jumped from an average of under 5% two weeks ago to over 5.7% this week.

The bond market, which ultimately determines what happens to interest rates, tends to drive rates down when the economic outlook is bad. Signs that the economy may no longer be getting worse contributed to the shift away from the rates under 5% seen in recent months.

However, some financial analyst are cautioning against the idea that we are going to see a major jump in rates. The economy will have to improve to support higher price points and realistically that will probably not happen until 2010.

Bankrate.com senior analyst Greg McBride said federal government borrowing to fund its huge deficit spending is driving up borrowing costs for everyone, “and for consumers that means higher mortgage rates.”

“If you wanted a sub-5% rate, that opportunity has passed you by,” McBride aid.

Rates for conforming 30-year fixed loans jumped from an average 5.03% last Tuesday to 5.44% on Thursday before slipping to 5.30% Friday, according to HSH Associates of Pompton Plains, N.J. Monday they edged up again, to 5.38%.

The bond market, which ultimately determines what happens to interest rates, tends to drive them down when the economic outlook is bad. Signs that the economy may no longer be getting worse contributed to the shift away from the rates under 5% seen in recent months, Gumbinger said.

Other reasons for the move include bond investors’ demands for higher rates because of worries that inflation may return sooner than anticipated and a flood of new sovereign debt being issued.

Bankrate.com senior analyst Greg McBride said federal government borrowing to fund its huge deficit spending is driving up borrowing costs for everyone, “If you wanted a sub-5% rate, that opportunity has passed you by,” McBride aid.

But heavy Federal Reserve purchases of Treasury bonds and mortgage-backed securities should in the short term keep the cost of home loans at what historically are extraordinarily low levels, he said.

“They may not necessarily be able to bring rates to sub-5%,” McBride said, “but they can keep a lid on mortgage rates.”

The upward tick is expected to slow refinancings more than home purchases, because, as Gumbinger put it, “The interest rate is just one of a number of planets which must align” for a home to get sold.

Still, the higher rates, if sustained, could put some additional downward pressure on home prices, since interest rates do affect affordability.