Interest rates increased once again in anticipation that the Federal Reserve would increase interest rates Wednesday. “As expected, the FOMC announced its first rate hike of 2017 and hinted at additional increases throughout the remainder of the year,” Freddie Mac Chief Economist Sean Becketti said. 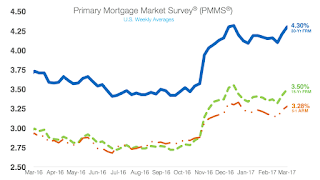 The five-year Treasury-indexed hybrid adjustable-rate mortgage increased to 3.28%, up from last week’s 3.23% and last year’s 2.93%.