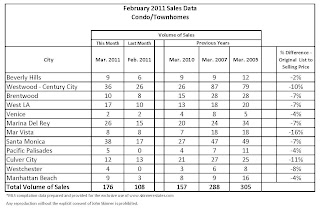 Overall, we saw a solid increase in sales volume over February, which was expected. However, the increase in sales of 62% over last month was unexpected and the 12% growth in sales over March 2010 continues to show the market is growing steadily out of the Great Recession. Though the numbers look good, we are still off nearly 63% from sales volume 2007 and 73% from the Wild West days of 2005.

Marina Del Rey had a phenomenal month with increasing sales over February by 73% and having a better month than March 2007 which is very rare. Some of this can be attributed to quite a few short sales going through in some of the mid 2005 constructed towers that were flooded with liar loans.

Both Santa Monica and Marina Del Rey are being aided by an influx of buyers thanks to the multitude of tech companies opening offices in the area. It is still considered a buyer’s market but the leverage buyer’s have enjoyed over the past few years is receding somewhat. The good news for sellers is that if they price the unit at or around market value they should be able to sell quickly with good terms.

A look at a few individual sales in Santa Monica: 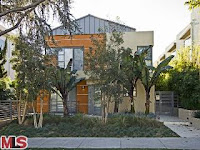 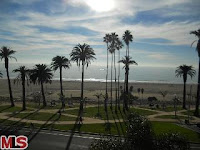