** Today is the last day that a purchaser can qualify for the $8,000 federal tax credit. A fully executed contract must be completed today and escrow must close by June 30th to receive the credit. Starting May 1st, the state of California is offering a $10,000 tax credit that can be spread over a three year period on the purchase of new construction…speaking of which, the new single family residences in Playa Vista known as the “ICON” development will be releasing its next phase for sale on May 22. There will be eight homes ranging from 3,200 sq. ft. to 3,800 sq. ft. Pricing will start in the $1.1M range.

** Great web-site for those shopping for a home loan: The website www.freerateupdate.com, tracks wholesale loan rates available to brokers. On Thursday morning they said such well qualified borrowers who paid 0.7% to 1% of the loan balance upfront to a broker could get a 30-year loan at 4.875%.

**Fixer Frenzy Part II: Fixing in the hood is hot! Check out this LA Times article: Flipping houses is back in South LA

** Celeb Corner
– The Bel-Air estate recently owned by actor Nicolas Cage that went to a foreclosure auction with no bidders is back on the market for $12.75 million. This is a gargantuan drop from the debut list price of $35 million in the past two years. The foreclosing lender was one of six holding a total of $18 million in loans on the 11,817 sq. ft. monstrasity featuring a 35-seat home theater, six bedrooms and nine bathrooms…Wow…talk about the false tale of American Treasure. 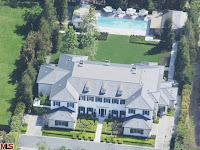 – Former William Morris chief Jim Wiatt has put his latest creation in the Pacific Palisades on the market for $19,500,000. The modern style Georgian mansion is 11,544 sq. ft. on just under an acre of land and was built in 2007. The house takes about 15 minutes to walk through and definitely defines luxurious living. I can see this home easily falling into the lap of another Hollywood Executive. The one downside to the property appears to be the lack of kitchen space for a home this spectacular but Wiatt has entertained for hundreds and wanted to have a true family style kitchen. I think it will be tough for this property to command a sales price north of $15 million but will see…you never know what can happen in this price range…

Wiatt is planning to move to New York to see if it is a good fit for the family but I think he will eventually be back in the Palisades since he is so entrenched with the movers and shakers of Los Angeles along with having some of the best paddle tennis courts in the country at his disposal. Wiatt is known for building some very nice houses in Los Angeles over the years but don’t expect him to build again if he does come back. . .

**When the Santa Monica Place opens in August, the third floor dining area will include views of the Pacific Ocean, six chef-driven restaurants and a wine bar and beer garden…talk about an upgrade from its predecessor…another great reason to live on the Westside!

**We will have an analysis of April sales posted next week along with an anlaysis of certain homes sales in specific price ranges! Make it a great weekend!

Mortgage interest rates were little changed this week, according to the latest Freddie Mac survey, which showed lenders were offering 30-year fixed-rate loans at an average of 5.06%, down from 5.07% a week before.

The average rate on mortgages fixed for 15 years was unchanged at 4.39%, Freddie Mac said.

On both types of fixed mortgages, borrowers would have paid an average of 0.7% of the loan amount in upfront fees and discount points to the lender. Additional third-party fees such as appraisals are paid separately.

The lenders in the survey provide a combination of rates and fees they are offering on loans of up to $417,000 to well-qualified borrowers who have downpayments or home equity of at least 20%.

A Look at the Quarterly Numbers in Manhattan Beach 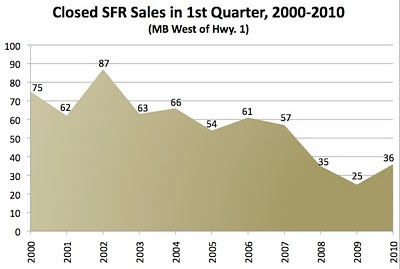 Like most high-end coastal sections of Southern California, the Manhattan Beach market west of Sepulveda finally started to pick-up in the 4th quarter and the 1st quarter this year was strong relative to last year with several listings selling quickly and some going into multiple offer situations.

If you look at the chart above based on closed sales in the MLS, you will notice the area is still well behind what a normal pace would be considered.
Sales were up 30% over 2009. The 25 closed sales last year in Q1 –2 per week, between Jan.-March 2009 – reflected a pace that was less than one-half the average for the decade.

The California Association of Realtors has updated and modified the Residential Purchase Agreement which went into effect on April 28th. Quite a few changes were made to the document and most realtors and legal professionals agree the document is easier to navigate and properly spells out issues that caused problems in the past.

Here is a quick overview of some of the changes:

Financing
*Separate paragraphs for the first and second loan.
*The loan period no longer needs to be specified.

Wood Destroying Pest Inspection
*The allocation paragraph only specifies who pays for the inspection only. The WPA addendum can still be attached to the contract but the new contract makes it easier for termite costs to be negotiated. Seller’s will probably start putting caps on what they are willing to pay for in terms of termite work.

Other quick hitters:
*Delivery to mean by personal receipt by principal or agent, whether sent by fax, email or other. It was not clearly defined before.
*Buyer’s investigation: Language added to clarify that buyer is obligated to turn over reports to the seller even after termination of the agreement.
*Title and Vesting: Listing agent’s need to get a statement of information from clients within three days of opening escrow since the contract requires the seller to give a statement of identity or similar form to title at the commencement rather than the end.

Lots of other items can be discussed but no need to bore you further. However, It is very important that you work with an agent who properly understands the new agreement and can advise you correctly. Most major companies like Prudential have required agents to attend seminars led by the company’s general counsel so they can properly advise clients.

Deals of the Week

(Please call or e-mail our office for more information) 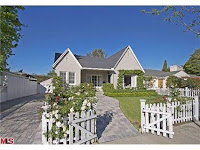 *Westwood-Century City: North of Olympic/East of Beverly Glen: List Price: $995,000- This approximate 2,000 sq. ft 3+1.75 storybook charmer is nestled on a 5,837 sq. ft. lot. The house features a redone gourmet kitchen, hardwood floors, remodeled bathrooms, great master and central air/heat. Compared to other properties in the neighborhood, this should go out at asking or above. 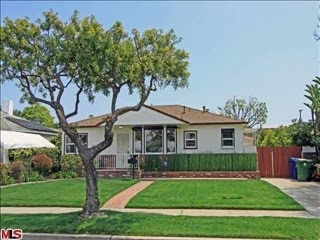 *Mar Vista: North of Palms/East of Walgrove/West of Centinela: List Price: $829,000- *short sale. This 2,036 sq. ft. 3+3 home sits on a 7,200 sq. ft. lot is tucked in an area that is one of the best kept secrets of Los Angeles. The home is in very good condition and will drive lots of interest once the bank approves a short sale price.

*Westchester: Just East of Sepulveda/South of 78th: List Price: $539,000- At just over 1,000 sq. ft, this 3+1 home on a 6,070 sq. ft. lot needs to be remodeled and updated. However, it is situated on a nice street and priced below market. They have already received 6 offers and will definitely go above asking.

In late October of 2009, The Bridges To Recovery psychological treatment center received a license (*copy below) from the state of California to treat up to 6 patients in a single family residence located at 1820 San Vicente Blvd.

This past weekend a flyer along with a copy of the permit was distributed to residences located near the facility. Most neighbors had no idea that such a facility was operating in the neighborhood and have expressed concern.

Confusion exists about what type of treatment goes on at that facility and what type of patients are at the clinic. These facilities are usually protected by civil rights laws to operate in most communities without objection. 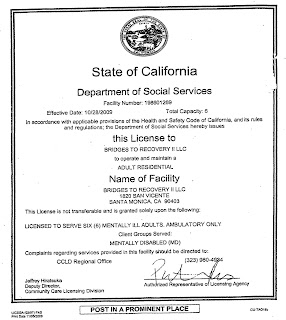 – Mortgage Rates: The typical rate being offered this week for a 30-year fixed-rate home loan was unchanged at 5.07%, with borrowers paying 0.6% of the loan balance in upfront lender fees, Freddie Mac said Thursday.

– Existing-home sales (National), which are completed transactions that include single-family, townhomes, condominiums and co-ops, rose 6.8 percent to a seasonally adjusted annual rate of 5.35 million units in March from 5.01 million in February, and are 16.1 percent above the 4.61 million-unit level in March 2009.Total housing inventory at the end of March rose 1.5 percent to 3.58 million existing homes available for sale, which represents an 8.0-month supply at the current sales pace, down from an 8.5-month supply in February. A normal market has under 6 months of supply and excludes some substantial shadow inventory.

Management responsibilities now fall in the hands of Patti Sinclair and Randy Johnson. His decision follows the Los Angeles City Council’s April 6 approval of the second and final phase of the development. A legal challenge from project opponents is expected.

Sinclair and Johnson both said their focus will be on selling the land for the final phase to developers. The 111-acre site is entitled for 2,800 homes, a shopping center and office buildings.

Playa Capital is in talks with potential developers of the property, including Rick Caruso, developer of the Grove and other Los Angeles-area retail centers. Caruso was slated to build a shopping center at the site before a delay in the entitlement process killed the deal.

– Commercial Note: As expected, Westside vacancies are up and Class A asking rents are down to $3.81, off from $4.21 from a year ago. Rates for Class B space actually increased six cents to $3.06, but were off more than 15 percent from 2009’s first quarter. The bright spot is that at a 10.5% vacancy rate, West Los Angeles has the lowest vacancy rate in the country.
In comparison, Downtown’s Class A asking rent is about $3.27.

Borrowers are required to be owner-occupants of the principal residence, show financial hardship and have a first lien mortgage originated on or before Jan. 1, 2009 with a principal balance that does not exceed $729,750. In addition, the borrower’s total monthly mortgage payment must be greater than 31% of his or her monthly gross income.

The pace of Single Family Residence (“SFR”) sales slowed down a bit in the first half of this month, with 7 homes going into escrow. For comparison, in the whole month of March, we saw 24 homes go into escrow.

Inventory has hit the market at about the same pace as March, with 14 new listings in the first part of April – March saw 27 for the whole month. Please note this is just a two week look at SFR sales. Total inventory moved up by 4 listings over the end of March to 85 SFRs total at mid-month. Still pretty lean in comparison to Westside area like Santa Monica and Pacific Palisades. The Sand and Tree sections each have 35 listings while the Hill checks in with 15.