Mar Vista and Santa Monica- A look inside the September numbers

Mar Vista: The hysteria of multiple offer madness is definitely dying down compared to last year. In 2013, Mar Vista had 25 sales for September with 19 of them over asking and the average sale going for 4% of the list price. The average days on market “DOM”, was 40. The median sale price was $945,000. This year, Mar Vista had 29 sales with only 11 over asking. Of those, 8 were at asking and only three were 5% over the asking price. The DOM increased to 51 as did the median sale price to $972,500. The average sale went for about 2% under the list price, a 6% difference compared to September 2013. Price have exploded so much in Mar Vista that a premium is already priced into the market and seller cannot expect the crazy multiples of last year unless they price it under market.

An example of an undervalued list price is 3031 Midvale, which was listed for $1.095M. The 3+2, 1700 sq. ft. (approximate) home on a 6,098 lot, is in escrow for around $1.2M which is around what I thought it would sell for when offering a price opinion. It was an all cash buyer and they received eight offers.

The craziest sale of the month was 2223 Cloverfield. The authentic Spanish 3+3, 2,132 sq. ft home on a 6,263 sq. ft. lot received over 10 offers. The list price was $1.699M and sold for 2.001M, 300K over the list price, despite being fairly close to Pico Blvd. The house had a strong emotional pull combining old world Spain with today’s modern amenities.

The sale of 881 Berkeley to a developer for 225K over asking shows developers are not slowing down in acquiring properties. The 11K lot was in high demand as large lots with ocean views are hard to come by in Santa Monica. It was listed for 2.375M and sold for 2.6M.

*Source- Multiple Listing Service- does not include any off-market activity

Westwood: September was a strong month. The lack of inventory only led to 19 sales (11 over asking- 5 that were 5% over list), but that was five more than last year. The DOM of 44 days was less than the 54 of 2013 and homes sold for 2% over list price compared with .5% above list last year.

This is unique since Westwood had quite a few high-end home sales with a median sales price of $2.05M compared with last year’s $1.567M. Typically you see a little more of a premium paid when the median for the month is lower as more affordable properties were sold.

The most noteworthy sale was 10737 Le Conte, which sold for $500K over the asking price. The classic traditional 4+4, 3,469 sq. ft. home on a spacious 8,235 lot, received33 offers. It is in good shape but the kitchen and some bathrooms could use updating. The property was listed for $2.095M and sold for $2.615M. It is located in a premier Westwood location within walking distance to UCLA and the village.

Westchester: Viewed as an affordable alternative to the pricier neighboring communities of Mar Vista and El Segundo, Westchester is one of the most popular areas with buyers right now. Once people visit areas like Kentwood and Loyola village, they are hooked and ready to buy.

Two sales stood out this month. They both feature large lots and are very inviting to medium to large families. 6415 Riggs Place, which sits on a bluff overlooking the city, is a 3+3, 2,948 sq. ft. traditional on a 14,630 lot with a phenomenal back-yard. Riggs is one of the most desirable streets in Westchester. The house was listed in an auction type manner at $1.550M and perspective buyers were asked to submit best and final right away with no possibility for a counter. The winning buyer paid $200K over asking settling at $1.750M. The house was in solid shape but will most likely be remodeled and expanded. It was a steep price to pay but worth it when you can grab that combination of lot size and views.

*Source- Multiple Listing Service- does not include any off-market activity

The city states they need the extra funds to further enhance the quality of life in the community of Santa Monica and help redevelopment efforts. In 2012 all city redevelopment agencies in California were dissolved due to budget cuts. Currently, Santa Monica has a lower transfer tax compared to Los Angeles ($4.50 per $1,000), but the new proposal would double that of Los Angeles.

With property values increasing over 40% in the Santa Monica over the past three years, the city is already seeing increased revenues from the transfer tax. The average median home sale in Santa Monica is approaching $1.3M and the large majority of residences in Santa Monica will be impacted by this increase.

Further, how fair is this to the people who bought at the height of the 2005 market. The market has recovered above those numbers but this unexpectedly cuts into a seller’s bottom line and ability to purchase an up-leg property. Sellers in Southern California are expected to pay the transfer tax (though it is negotiable) and this would increase the total closing costs for Santa Monica residents about .7%. The county of Los Angeles also receives $1.10 per $1,00.00 as well. Assuming a 5% brokerage fee and the numerous fees that go with selling a home, Santa Monica residents are looking at 9% in sale expenses.

If you are going to increase the transfer tax, why not make it less daunting, maybe $5.50 per $1,000.00? This seems like a dramatic jump for a city that already levies increased taxes on the purchase of a car and charges a 9.5% sales tax compared to LA’s 9.0%. A good chance exists this measure will pass with a majority of renters in Santa Monica and the powerful group Santa Monican’s for Renters Rights pushing to get this passed. Feel free to read more about Measure H.

The days of trying to hide the sale price of a home officially ends January 1st, 2015

Years ago it was a common practice for celebrities and developers to try and hide what they bought a property for. This was done by having the tax stamps put on the back of the deed instead of the front.

Lately, the Multiple Listing Service “MLS” and the county of Los Angeles have been combating this tactic and checking the back of the documents and able to produce the sale price within six months.

Effective January 1st, 2015 AB 1888 requires the amount of tax due and the location of the property to show on the face of the document on ALL properties. You can no longer close escrow and try and
withhold the sales price from the public. The MLS and various realtor groups have been campaigning for this as it makes the valuation of properties more accurate and puts everyone on a level playing field.

Informative articles from the LA Times you should be aware of:

Home Sales pick up pace in So Cal for September– It’s the latest sign of a housing market that’s reaching equilibrium after years of big swings. Real estate agents and other market watchers this summer have reported growing inventory, price cuts and a shift in the market toward regular buyers, instead of the flood of investors and cash-only purchasers. 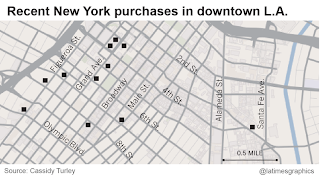